Parts Required
Backdating to MS43 requires more than just the ECU. Three different wiring harnesses are required for various sensors and components - main engine wiring harness, ignition coil harness, and O2 sensor harness (combined with the transmission harness). There are multiple ways to accomplish this conversion and we will outline a few here. Many of the parts required for a conversion can be purchased used, while some should only be bought new. For a complete and hassle-free conversion, the entire list from Option 1 should be completed.

Coil Harness DME Plug. The DME plug on the coil harness must be re-pinned to match the MS43 ECU. You can re-pin the existing plug or buy a new blank plug and the pins and start from scratch.
Coil Harness Main Connector. A small change is required on the coil harness power/ground plug. The difference is shown in the image below. Unfortunately, BMW does not sell the MS43 plug by itself. We have identified similar plugs from the BMW catalog but your best option may be to change both harnesses to a more reliable design such as a Deutsch connector.

You can also find specialists in the SE46 community who will build you a wiring harness to match your needs. 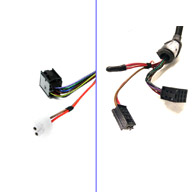 Coil power connector differences.
O2 Sensor Connectors on Transmission Harness
The oxygen sensors are connected through the transmission harness and not the main engine harness. You must have the harness for the early style O2 sensors (2001-2002). There are two transmission harnesses - one for manual (#12517506794) and one for automatic (#12517506793). The manual harness is ideal but harder to come by (it appears BMW has discontinued it). You can use the automatic transmission harness but be aware that it will have extra connectors that you don't need, as well as, connectors may be in the wrong location for use on a manual transmission (example: reverse light switch). In our shop, we have never converted an automatic car to manual so our depth of experience here is limited. We encourage you to seek answers in the SE46 community.

Overcoming EWS
You may finish connecting everything, turn the ignition key, and the engine only cranks without starting. The "likely" reason is caused by the EWS system. EWS is a sophisticated anti-theft system from BMW. The complete system consists of the ECU, an EWS module, the main body harness electrical module (GM5), the ignition switch and the key. All components are coded to each other and they must send coded messages to the ECU before it will allow the engine to start. The engine will not run if the ECU has been removed from one car and installed into another because the coding is not the same. You have two options to overcome this: