The Basics of Data Acquisition Systems for HPDE and Track

If you've ever wondered if you can go deeper into a corner, or if your exit speed could be higher, or what your peak oil temp was, or if you've just wondered about anything else during your session, then you should be in the market for data acquisition. This page is Data Acquisition 101, an introduction to the levels and complexities of data gathering and analysis. We don't just sell these products and systems but we use them as well - with drivers of all levels - so we're prepared and happy to transfer our first-hand knowledge to you. Although you will find BMW references and focus here, most of this info will apply to anyone on track who wants to know a little or a lot of what's going on beneath the surface.


Your First Data Acquisition System
We're all given a data acquisition system to start with: your body and its five [sometimes six] senses. It's how you know the brakes are locking up or there's a coolant leak somewhere. Our first bit of advice is to master your own senses first. Sure, data will show you're faster exiting the corner than the previous lap but you should be aware of that in real time. As a rookie or novice data streams and lap times should not be part of your learning curve. What video games have taken away from us is the tactile feel of the steering, brakes, and tire contact patch. Not to mention the smells, noises, and vibrations that affect our analytics in real time. Experiencing and interpreting the data first-hand is the first essential step and will make your data analysis much easier and better quality later on.

Your butt dyno/gyro should be in tune after you've had correct instruction and a dozen or so track days under your helmet. With a proper understanding of the forces, causes and effects of driving dynamics, you can now start to wonder, "Am I going quick enough?" "Am I getting all of the grip in that turn?" Such basic questions do not need a big budget data analysis package for answers. We have several recommendations that are excellent tools for novices/intermediate drivers. 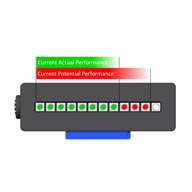 APEX Pro is a dash-mounted LED display showing your car's potential in real time. Note the emphasis on car and not driver. It uses GPS, an inertial measuring unit, and a well-developed algorithm to estimate how much grip your car is capable of. And the LED display shows how close, or far, you are from reaching that limit. You can also have an instructor or faster driver turn a few laps to set a baseline to measure against (like beating a high score in an arcade machine). This is not a predictive lap time like the AiM products or sector times like in iRacing. It's telling you in real time if you are under-performing at any point on the track via the red and green LEDs. As your performance improves the red lights turn to green. This makes it an excellent tool for beginner and novice drivers who need to trust in their car's abilities and tires in order to go faster. A smartphone app records your session to view later. The APEX Pro is not permanently installed and it can be swapped between drivers and cars. It doesn't need any sensors or data from the car and it's battery powered. A lot of instructors use it with their students as an additional learning tool. Available from several online retailers. 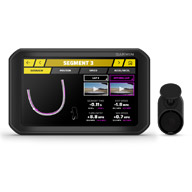 Garmin has combined GPS data with accelerometer data, video processing, and AI to produce a dash-mounted driver coach. If you are an intermediate solo driver who wants real-time coaching that can be reviewed at any time, you're going to love this. Catalyst progresses along with you, constantly re-evaluating your speed and track position to identify opportunities for improvement. It's not going to replace an instructor who makes you a better driver through technique. But it will make you a faster driver by showing and telling you where there is potential for more speed. In addition to traditional data plots on a graph that you review post-session, Catalyst gives you suggestions to try during your session: "brake less", "apex earlier", "track out more". Catalyst doesn't suggest anything that hasn't already been successfully executed. Trust in its coaching and it will make you a faster and more consistent driver. It's focus is on driver consistency and improving your average incrementally.

Catalyst is focused on driver improvement and it won't make your car handle better or make more power. For that you need car data such as an OBD connection. Garmin has not revealed any plans to include an OBD connection so this will not replace a data logger. If you're focus is fine-tuning your skills to be a better driver with a highly-adaptable and portable tool, this is it. If you've advanced to the point where you can correctly predict what Catalyst will say, then it's time to expand your hardware and dive into the data. See more details, photos, and video of the Garmin Catalyst by clicking here. 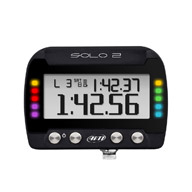 The SOLO products are the introductory data gathering products from AiM Sports. If you have used iRacing or spent any time at club racing events you have seen AiM dashboards and systems. They are the most prevalent data systems in the world. What you get with SOLO products is a data acquisition and analysis system, produced by professional data engineers in a task-focused package. In other words, this is a really really fancy stopwatch that forms the basis for more in-depth data understanding later on. SOLO is available as only a laptimer (SOLO) or timing with data logging capabilities (see SOLO DL below). It's a dash-mounted display that has excellent recording features that let you go deep into data analysis post-session. SOLO differs from APEX Pro by focusing on driver analysis and development instead of real-time car potential. SOLO uses predictive lap and sector times, just like in iRacing. Timing is displayed on screen while LEDs indicate real-time performance - green shows improvement, red for a slower time. The LEDs are also programmable so you can focus on certain data or use them as shift-indicator lights.

What really sets the SOLO and APEX Pro products apart is the analysis software. APEX analysis is limited to the app with the focus being on real time encouragement to go faster. SOLO data can be viewed three ways: realtime on the LCD dash display and LEDs, the AiM app, and AiM’s fantastic Race Studio software on a laptop. If you're planning to follow the path to being a serious driver or racer you will want to master the Race Studio software. It's the same software pro-level drivers, coaches, and engineers use, the only difference is how much data is available to display. AiM's focus is on studying your data post-session so you can prepare and experiment in the next session. One disappointing drawback is that the standard SOLO (non DL) cannot be mated to a camera system without third-party software. 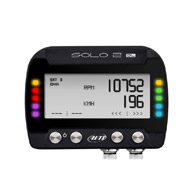 The DL is for Data Logging and this unit takes the standard SOLO and adds the capability of limited data acquisition. Adding data will take your driver development to the next level. While this is an advanced laptimer, it has features similar to a full-race dash but in a plug-and-play and non-permanent install. It's greatest attribute is that it can tap into existing sensors and data in your car. Information like RPM, throttle position, steering angle, fuel level, oil temp, g-force, and on and on can be recorded and/or displayed. Plus, the AiM SmartyCam is a direct plug-in to the SOLO DL so you can watch video with data as soon as you return to the paddock. Other cameras, like a GoPro, will not plug in to a SOLO and will need third-party software and a lot of spare time to produce a video worth watching.

There are multiple sources for data with the SOLO DL: RPM-only (used mostly on older cars without a CAN datastream), a cable plugged into your OBD port (if something else is not already there), or by hardwiring a cable directly to your car’s CAN bus harness. The third option is our preferred because you have more data sources than the OBD plug and hardwiring is more stable and will not interfere with other systems. It does take more expertise for installation so it may be best left up to a professional. The OBD cable option makes the entire system more mobile and you can jump from car to car. But OBD data can be somewhat limited and delayed. And you have to make sure some other cable is not using the OBD port already (like another aftermarket gauge or even a piggyback tuner). 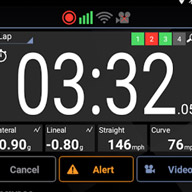 Of course there's an app for laptiming and data logging! Apps suchs as TrackAddict and Harry's Lap Timer provide a lot of bang for the buck and will interface with a lot of different tools to provide data sources, including your phone's camera. And because it's an app many are low cost or even free. Apps rely on your phone's existing GPS signal to identify location and set start/finish points. Many apps will have additional features such as data logging but will require a third-party hardware device to link with over Bluetooth (OBDLink, Kiwi, etc). This can be a slow and finicky method of data transfer but fully developed apps like the two mentioned above do a great job of blending GPS, OBD data, and camera footage into a single file. Apps sound too good to be true and we have found that their shortcomings make them a short-lived experiment. We have found that many people try these apps due to the low upfront risk and if they really like the experience they move on to a more developed package such as an AiM SOLO DL.


What Data Is Not:
Data alone will not make you a better driver or have a more reliable or faster car. It's the interpretation of the data, and positive result of it, that gets you to the next level. For the best analysis you need an experienced driver, engineer, or driving coach. We're here to assist in your purchase and set up of data tools (and performance parts) but what you do with it is up to you. 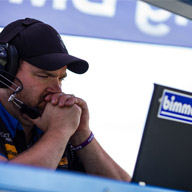 Our bias is towards the AiM products because we view them as a path towards deeper data and driver analysis. Their products can be as simple or as detailed as you need them to be and their product line matures along with the driver. You can start with the SOLO laptimer and progress up to MXx dash logger, matching your driving expertise with their data tools.